Freddie For A Day Press Release 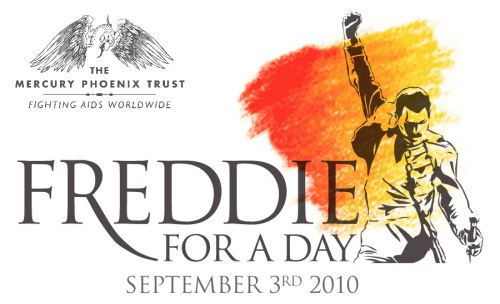 ARE YOU READY TO BE FREDDIE?

What is Freddie For A Day?

Freddie For A Day is a celebration of the life of Freddie Mercury which falls around his birthday date.  It is meant to engage members of the public in a fun way to remember one of our greatest artists, but behind it is the earnest purpose of raising
funds to support the continued work in fighting HIV AIDS worldwide through the
Mercury Phoenix Trust, the HIV AIDS charitable organisation set up in Freddie’s memory after his passing almost 20 years ago.

How Did Freddie For A Day Get Started?

Freddie For A Day began as a lone ranger initiative dreamed up by City worker Liz Swanton who also gives her time to editing the Mercury Phoenix Trust website (www.mercuryphoenixtrust.com).  Tying in with the recent 8th birthday celebrations for the Queen musical ‘We Will Rock You’, Liz came up with the idea of spending a whole working day dressed as Freddie.  Liz’s incentive to exposing herself to what would surely be a totally unpredictable day was her certainty that she could get her co-workers and friends to sponsor her efforts and put their hands in their pockets to give to The Mercury Phoenix Trust. Liz carried it off with great bravura and was rewarded with donations of several thousand pounds to the MPT and even got to meet Brian May and Roger Taylor at the birthday performance of WWRY.

When Liz wrote up her full account of her day at the Mercury Phoenix website (click here for Liz’s diary and pictures) the public responded overwhelmingly, wanting to know how they could set up their own Freddie For A Day.  At that point it was decided to make FFAD an annual event, coinciding with Freddie’s birthday.

So When Will Freddie For A Day Take Place?

Who Can Take Part?

Anyone.  Naturally, the first people to have decided to join in are the core fans, but Liz and the Mercury Phoenix Trust organisers are hoping that the challenge to live out a normal day in a Freddie costume – with all the fun attached – and with the purpose of raising money to help the worldwide work being done by the MPT, will have a wide public appeal.

How Do You Get Involved?

All you need to do is dress up as Freddie for a day and get your friends, family and school friends or work colleagues to sponsor you.  You can set up or get an adult to set up for you your own web page at www.justgiving.com and send this to those supporting you so they can sponsor you online. Otherwise, if you are collecting cash and cheques you can send directly to the Mercury Phoenix Trust at the information given below.

How to Get Started?

Firstly you’ll need your Freddie outfit. You can adopt any costume Freddie wore on stage.  If you need some ideas, you can check out the examples of Freddie outfits which can be seen online at the Mercury Phoenix Trust website.

To make it easier for you this first time around we can help you with a costume. The ‘Live Magic Freddie’ yellow jacket and white trousers outfit that Freddie wore at Wembley Stadium in 1986 has been made available to buy at the official Freddie For A Day store established at the MPT website (www.mercuryphoenixtrust.com).  By the way, all profits from these sales go to the Mercury Phoenix Trust so you will already be giving to the charity. Otherwise, you can make your own costume.  Diana Moseley, Freddie’s costume designer will be posting ideas and suggestions at the MPT website and Richard Gray, Queen’s photographer and creative designer, will provide a gallery of photos of the costumes.

And if you’re making you own costume, please do send a photo to the MPT.  Diana Moseley will be judging the best home-made costume and a handful of winners will receive a special MPT certificate signed personally by Queen band members Brian May and Roger Taylor.

How Do I Go About Setting Up Sponsorship?

Setting up you own Just Giving (First Giving in the US) page means you can tell the world about your fundraising and your friends and family can support you through sponsoring you on-line. Creating your sponsorship page is really easy, just follow our ‘How To’ guide here on the MPT site.

Once you have created your page and registered, the site lets you search your contacts to see who you would like to send this to, so you can simply forward the link around to those who you wish to sponsor you.

Please note:  Although Just Giving is based on the UK you can give from anywhere in the World. The donation will be converted from the local currency into pounds sterling (£).

If you are unable to donate online you can send in cheques directly to the MPT at the address below. Cheques should be made out to The Mercury Phoenix Trust.

So Should I Keep A Diary of My Day?

Yes please! The Mercury Phoenix Trust would love to hear what happened during your day and how your colleagues, family, friends and members of the public reacted.
How brave were you – did you take the tube/bus as normal?  What happened during your lunch break?  Did you - like Liz – go all the way and even wear a moustache for the day?  Do please send in details of your experience in writing to the Mercury Phoenix Trust at Diese E-Mail-Adresse ist vor Spambots geschützt! Zur Anzeige muss JavaScript eingeschaltet sein!.  The best of these will be shared with everyone else on the website.

Tell Me More About the Mercury Phoenix Trust.

Freddie Mercury died from AIDS related illness on 24th November 1991. Immediately the remaining members of Queen and their manager Jim Beach took the decision to found an organisation to raise money and awareness of AIDS in Freddie’s memory.
Together they organised the 1992 Freddie Mercury Tribute Concert for AIDS Awareness. The Mercury Phoenix Trust was formed to distribute the money raised from this concert as well as earnings from record royalties donated by Queen themselves.

To date the Mercury Phoenix Trust has been responsible for giving over £10 million to charities worldwide to help in the fight against AIDS. It has now adapted its policy to concentrate on HIV AIDS education and awareness in the developing world.

Why Is It So Important to Still Support HIV AIDS?

When Freddie Mercury passed away from AIDS related causes in 1991 awareness of the causes and effects were still a mystery to a great many of the population.  Freddie’s death and the events which followed played a big part in bringing the issue out into the open.  Since then the work of many worldwide health organisations and high profile AIDS charities such as the Elton John AIDS Foundation, amfAR (The American Foundation for AIDS Research), the Terrence Higgins Trust, Nelson Mandela’s 46664 foundation and The Mercury Phoenix Trust have helped draw attention and better understanding to the subject throughout the world.  But despite the enormous work that has been done since 1991, AIDS has not gone away and remains as great a threat as ever.  Current estimates show that are now 33.4 million people living with AIDS worldwide, 15.5 million of which are women and 2 million are children under the age of 15.  AIDS and HIV infection takes 8, 200 lives per day. Until there is an even greater understanding of the how AIDS is caused and how it can be prevented and treated, AIDS infection will continue to be with us.  More research and education remains vital to the protection of every one of us. By supporting this initiative of The Mercury Phoenix Trust you will be playing an important part in helping to reach a day when AIDS and HIV infection no longer continues to devastate communities and entire countries throughout the world.

What To Wear:  Hints and Tips 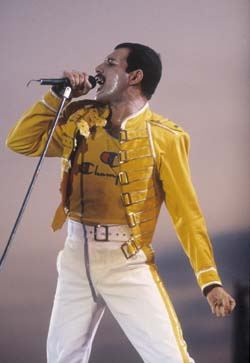 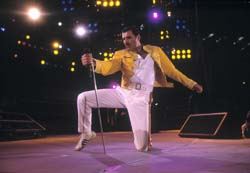 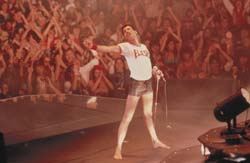 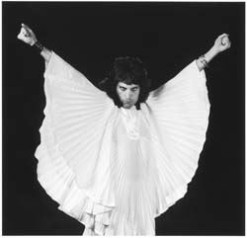 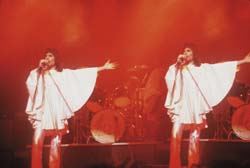 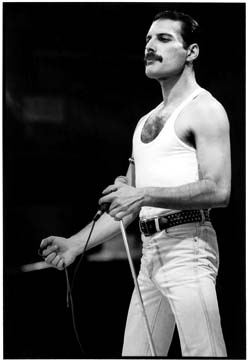 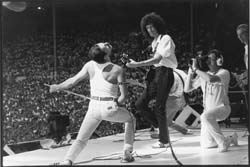 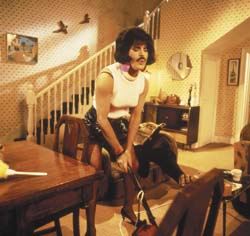 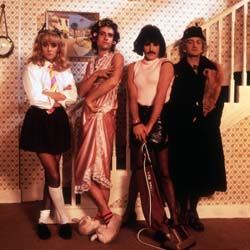 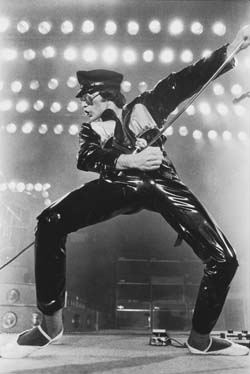 Leotard Freddie
(Any of Freddie Mercury's various all in one leotards) 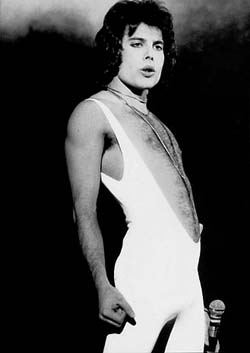 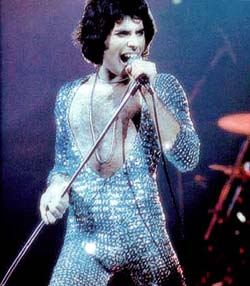 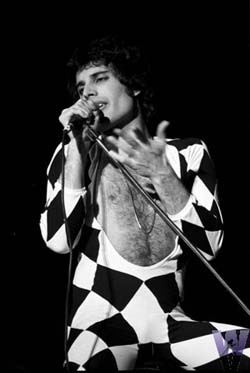 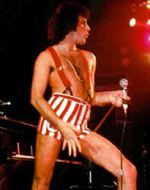