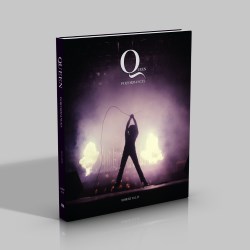 The shows and events portrayed in this book document the phases, changes and development of the band. They are arranged in chronological order and fully documented. I want this book to be used as a point of reference in years to come to help readers relive the way they looked with each album and promotion. The main costume themes were white followed by black. Except that the band and the shows were anything but black and white. The blaze of colour assaulted the senses in that structured R'n'R way that seems lost on todays bands. You want to know how it was done right? look no further than in the pages of this book.