No preentry for the german Queen + Adam Lambert gigs

We are sorry to announce that contrary to 2008 Queen + Paul Rodgers and 2016 Queen + Adam Lambert in Cologne unfortunately can not offer a preentry for the members of the Queen Fan-Club Germany with standing tickets for the three Queen + Adam Lambert gigs in Germany 2018.
Today we have received a message that the promoter and tour manager reply saying early entry is not possible due to sound check and production arrangements.

Nevertheless we wish you lots of fun with the three Queen + Adam Lambert gigs in 2018 in Germany.

QFCG celebrates Freddie For A Day

The QFCG will celebrate the Freddie For A day at the Hard Rock Cafe in Cologne on the 05.09.2013.

There is more information under QFCG celebrates Freddie For A Day.

We Will Rock You - Finally back in Switzerland!

The following pressinfo is from BB Promotion. Thank You! 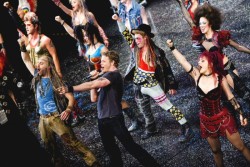 Basel, 23 November 2011. From December 2012, Basel will be rocking again: WE WILL ROCK YOU, the original QUEEN musical with twenty-one of the legendary band’s greatest hits, finally returns to Switzerland after five years! Over twelve million spectators worldwide, five million alone at the Dominion Theatre, one of the biggest theatres in London’s West End, make WE WILL ROCK YOU one of the most successful musicals of all times. No wonder that WE WILL ROCK YOU won the prestigious Olivier Audience Award 2011. The spectacular original London version was written by the award-winning bestselling author Ben Elton (Mr. Bean) and was produced by Queen Theatrical Productions together with Robert de Niro’s Tribeca Theatrical Productions and Phil McIntyre Entertainment. Music and lyrics were of course written by QUEEN.

The show is written and directed by Ben Elton. In Basel too, rock icons Brian May and Roger Taylor themselves are in charge of the music, as the legendary QUEEN songs do not only form the framework for the story, but also guarantee its absolutely sensational, extravagant Rock sound.

Brian May: “We are thrilled that we can present WE WILL ROCK YOU in this latest technically revised version in German for the first time in Basel. It is impressive to see the audience jump and sing along, swinging their hands, simply having fun. We are very proud of this Swiss production. It is like no other in the world. The ensemble and the group have their very own style. But what matters most…the show is live, dangerous and more than anything else: it rocks!”

Between December 2006 and December 2007, during its one-year run at the Zürcher Theater 11, the bombastic rock show wowed about 400,000 spectators. Already back then the production (especially adapted for the Swiss) fascinated the audience. In Basel, however, a completely updated Swiss version will be performed. And there is more: The audience in Switzerland will be the first to enjoy the technically revamped video animations, newly re-mastered by production designer Mark Fisher and created in collaboration with acclaimed lighting designer Willie Williams. Between them Fisher and Williams have designed some of the most spectacular rock tours, most prominently their joint work for U2.

The story of QUEEN is one of the most remarkable in pop culture: More than 300 million albums sold worldwide, eighteen number-one albums, numerous numberone singles and DVDs, joining the Rock & Roll and the Songwriters’ Hall of Fame, over 700 concerts all over the world, including the historic appearance at Live Aid and a Guinness Book of World Records Award for the most successful UK chart album in history. QUEEN was and is one of the greatest rock groups of all time. 2011 marked the mega-group’s fortieth anniversary. WE WILL ROCK YOU crowns the group’s incredible success story in an impressive way.

WE WILL ROCK YOU tells the story of a globalized future without musical instruments. A handful of rock rebels, the “Bohemians”, fight against the allpowerful Globalsoft company and its boss, the Killer Queen; they fight for freedom, individuality and the rebirth of the age of rock. Scaramouche and Galileo, two young outsiders, cannot come to terms with the bleak conformist reality. They join the Bohemians and embark on the search to find the unlimited power of freedom, love and Rock!

From December 2012, the year that marks the tenth anniversary since its premiere in London, the very first “Rock theatrical”, as the legendary QUEEN guitarist Brian May calls it, the show is coming to Basel’s Musical Theater in its original production, in a German-language elaborate version. With a wink and many ironic sideswipes WE WILL ROCK YOU is more than just a show title, more than a musical and more than a rock concert - it is a promise: WE WILL ROCK YOU!

Here is the current information of the queentribute.de-project:

This goes out to all you creative and productive people. As you might know, our album is currently in the final mixing process so we started to talk about what to do artwork wise. We came up with the idea of having a contest. That way all of you are able to be part of our full length CD. The procedure is simple: We’ll upload all artworks into our facebook and myspace picture section and you can go there and comment on it. The artwork with the most comments wins.

Facts:
We want you and your ideas to be as free as possible so there are only a few things you should be aware of. Please don't use the official Queen-Logo or Queen-Fotos. The record is entitled “Queen Tribute” or "A Tribute to Queen". A subtitle fitting to your artwork is optional. (Suggestions: "Crazy Little Thing Called Rock", Anotherone Rides The Bus", "Gunpowder Gelatine")
In order to have a coherent look, we would ask a front cover and an inlay card of you. Please make sure to meet the specs so that there won’t be any problems with it. Of course we reserve the right to not upload jokey or offensive artworks.

What’s in there for you as a designer?
First of all it’s all about the fame, but for those of you who need a little persuasion, here is what’s planned.
- Your artwork will be used for the final record, that you’ll get one of for free, when it’s done and in sale
- Massive promotion for you and your work. We’d love to give your name and your website on all record-related locations.
- If possible, we are going to print some fancy shirts with your artwork. Of course you’ll get one of these for free

Send your artwork (previews are okay) to This email address is being protected from spambots. You need JavaScript enabled to view it.. Deadline is 31st October, after that the voting / commenting will start for ten days.

The Fan-Mail No. 52 is out now for all fan-club-members.

Please give us a week for delivering, but if you doesn't receive it after this time, please contact us, thanks.