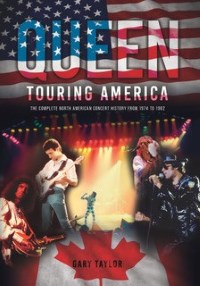 Brian May: “We used to tour every year about nine months and most of it was in the States in those early days. So it really formed us as a band and we absolutely had a love affair with America.”

This unofficial book concentrates solely on their tours of the USA and Canada during the 1970’s and 1980’s, where they played 269 concerts in all and performed in nearly every state along the way. Here is their complete live performance history throughout North America, listing every concert as well as set lists, on tour interviews, a complete overview of their stage shows and accompanied by many unpublished photos taken by fans who attended.

You will find not only the dates, venues, towns and cities that they played in, but also, if known, what songs the band played and Freddie and Brian’s repartee with the audience. I have also included some stories and anecdotes around the gigs, for example, what the band got up to before and after a concert, including radio interviews, photo sessions, travel arrangements and parties that were thrown, all interspersed with quotes from the band talking about concerts and their life on the road as a top touring band during this period.

Focusing on the live shows themselves, and listing every show played and many that were cancelled, I have also included information and new details on the Queen lighting rigs, stage design and effects, instruments played, support bands, bootleg releases and what shows were recorded, both on cassette and film. Also, for the first time, a comprehensive insight into all the band's fascinating stage costumes that they wore on each tour is included, and is a complete as possible amalgamation of everything we know about Queen live during this period, collated for the first time in a book and offering collective information about one of the worlds most popular and entertaining rock bands ever.

The book describes how the band were live on stage at the time with recollections too from fans who were at a particular gig, complete with tickets, adverts, and a selection of reviews from newspapers. Both fans and press describe in detail of how the concerts were perceived at the time and not always favourably, especially by the press, and this is how some the story is told, through their eyes and ears.

Queen's music is as popular now as it has ever been. The band still perform, are constantly played on the airwaves, still sell albums and be presented with gold and platinum awards, receive accolades from the music industry and fellow performers constantly, and they continue to top 'best of' charts around the world. If you saw the band live in the flesh, or you have just seen them on your TV screen, or maybe you’ve recently watched Live Aid, then you know what an exciting and visually compelling band they were. Be it in a small theatre or huge stadium, Queen dominated the live domain and were by far the very best at what they did.

A donation from the sales of this book will be given to The Mercury Phoenix Trust and Rowcroft Hospice (Torquay), where my Mum ended her days.

Freddie Mercury: “I like people to go away from a Queen show feeling fully entertained, having had a good time. I think Queen songs are pure escapism, like going to see a good film - after that, they can go away and say, ‘that was great’ and go back to their problems.”