The Treasures of Queen 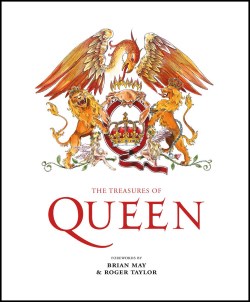 The Treasures of Queen

The Treasures of Queen is an official publication, and has been approved at every stage by the band. It shows and tells the story of a fantastically talented and popular group of musicians who have gained and retained an enormous fan base. The book celebrates the band, its members, recordings and concerts through images and the written word, as well as through the unique pieces of memorabilia that are from the private collections of Queen's members. The Treasures of Queen gives fans unprecedented access to all areas, and the chance to see some amazing memorabilia reproduced on the page: backstage passes, handwritten lyrics, unpublished album art, ultra-rare posters, original tour itineraries, postcards, limited-edition records, invites to the now-legendary tour parties, and more! This is their story.

Harry Doherty has worked as a music journalist since the early 1970s, when he joined Melody Maker as a staff writer. In the course of his time with MM, he covered a range of top bands, and wrote major features on many artists including Queen, with whom he developed a close relationship. Subsequently, Doherty went on to be founding editor of Metal Hammer in the UK and then became editor-in-chief on the world's first hard rock video-magazine, Hard 'n' Heavy.