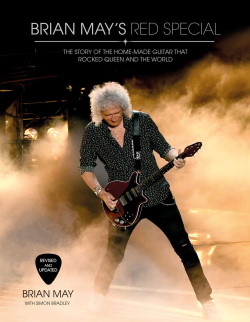 This book offers a full exploration of every aspect of this extraordinary, hand-built musical instrument played by Brian May in Queen.

Includes rare photographs of the Red Special, Brian and his father, Queen and images from the set of Bohemian Rhapsody.

The guitar was fully dismantled and every piece photographed for the book.

In Brian May’s Red Special you will discover everything about Brian May’s unique, home-made guitar. Brian reveals all, from the guitar’s origins to playing on the roof of Buckingham Palace, from Live Aid to the closing ceremony of the London 2012 Olympics, and from the set of Bohemian Rhapsody to opening the Academy Awards in 2019 where the film scooped four Oscars. All of this is accompanied by original diagrams, sketches and notes from the building of the guitar, as well as a selection of classic photographs including Brian on stage with his guitar, close-ups and even an X-ray. Rare images are included throughout, as the entire guitar was dismantled and photographed for the book.

Brian May, best known as the lead guitarist of the supergroup Queen, completed the PhD in astrophysics that he abandoned when Queen first started to find fame. He continues to tour with Queen + Adam Lambert.

Simon Bradley has been a guitar journalist since 1996, and he has written hundreds of articles and interviews on all aspects of the instrument for many magazines and web sites including Guitarist, Total Guitar, What Guitar?, Classic Rock, Metal Hammer, Future Music, MusicRadar.com, Brianmay.com, and many more.